What is a cask beer or ale?

While cask beers or cask ales aren't the most popular style of beer, they are absolutely 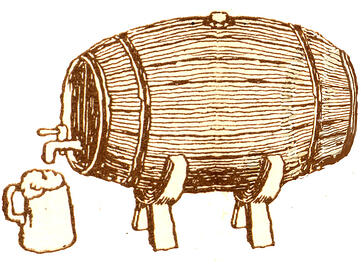 still noteworthy in the roles that they played in history as well as current brewing trends.

Essentially a cask beer, or also known as a cask ale, is the term used for an unfiltered and unpasteurized beer (still active on the yeast) which is conditioned and served from a cask. There is no additional nitrogen or carbon dioxide pressure added, which usually dictates the amount of carbonation the beer contains.

There are actually a few names for cask ales like the following:

A cask is simply the container the beer is conditioned in.

What exactly is a Real Ale?

The term "Real Ale" was given to a specific type of beer, however, The beers which are typically brewed from traditional ingredients and mature naturally. They are also served without the use of any superfluous carbon dioxide, which is the more traditional way of brewing and serving beer, as only a few decades ago did it become normal to serve beer with gas.

Cask ales have a much shorter shelf life because they may still contain the yeast (depends on whether they're a simple higher-level styled cask ale or a more specific "Real Ale"). If left partially full in a cask too long, a cask ale may begin to taste of vinegar due to the oxidizing effect. This is why keg beers were created and have became the norm, simply because they last longer.

While cask ales are not extinct, they are harder to find. They generally generate lower profits for breweries and are also a more complicated operating practice which needs different equipment than they may be used to. Another major barrier to entry for a cask ale is the fact that most bars and restaurants aren't equipped to keep a cask ale. Also, if people aren't drinking the full cask within a reasonable time-range, they can oxidize, and this is likely since the majority of the population is unaware of cask ales.

Where can I find a cask ale?

Have any knowledge bombs to drop on cask ale? Drop them into the comment box below!