For years and years, wine drinkers have been indulging without guilt. They’re able to do 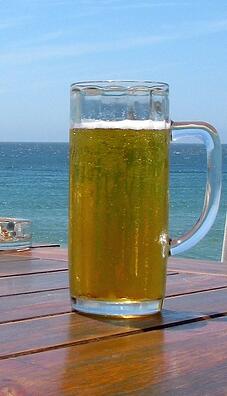 so thanks to the health benefits that wine has to offer. Unfortunately, beer drinkers everywhere have had no choice but to sit by and watch. When faced with the excuse of “but wine is great for heart health” what can a beer drinker respond with?

However, thanks to some recent studies as well as the Internet which is making more health information readily accessible, beer drinkers are discovering that beer, too, offers some wonderful health benefits. In fact, when consumed in moderation (one beer a day for women and two for men) beer offers health benefits for many parts of the body from the brain to the bones.

When reading about the fabulous health benefits of beer, keep in mind that beer should be consumed in moderation. Excessive drinking will have the opposite effect on your health. In addition, to get the most out of beer you’ll want to focus on consuming craft beers, microbrews, and specialty beers versus the standard, mass produced product. Mainly because craft beers, microbrews, and speciality beers tend to contain more natural ingredients and less chemicals, preservatives, etc.

Here are just a few of the reasons that craft beers are great for your health:

Wine isn’t the only alcoholic beverage that’s good for heart health. Beer contains antioxidants which are good for a variety of things one of which is preventing heart disease. A major ingrendient in beer, hops, contain polyphenols (a type of antioxidant) which help to lower cholesterol and fight certain types of cancer.

Unfortunately, not all beers are created equal, and some beers contain more antioxidants than others. According to the Beer of the Month Club, craft beers have up to 30 times more hops than the average mass produced beer, so reach for a craft beer to get the most bang for your buck.

If your life is stressful (and who’s isn’t?) and you worry about your blood pressure, try kicking back with a cold one. A Nursing Health study of over 70,000 women between 25-42 found that those who drank moderate amounts of beer had lower blood pressures than those who consumed other alcoholic beverages (including wine).

Growing up, your mother probably lectured you on the value of eating vegetables. She probably told you that you needed to eat them so that you could grow up to be big and strong. Little did she know that all you had to do was wait until you turned 21 and started consuming beer! Beer contains both calcium and silicon (soluble silica) which both help build strong bones, teeth, and nails. According to Lisa Cool, “In a 2009 study at Tufts University and other centers, older men and women who swigged one or two drinks daily had higher bone density, with the greatest benefits found in those who favored beer or wine" (2012).

4. Craft beer has shown to help with cognitive function and memory disorders:

If Alzheimer’s disease or other types of dementia run in your family or you’ve noticed a tendency in yourself to be forgetful and you worry memory issues beer may be able to help. Some studies have shown that beer can help with cognitive function and memory disorders. A study at the Rush University Medical Center found that “moderate drinkers are 23% less likely to develop memory problems, Alzheimer’s disease, or other types of dementia”. However, most cognitive disorders are not reversible; once the damage has been done there’s no going back so its important to prevent them or at least retard their progress meaning you should begin moderate beer consumption and other preventative measures now before problems present.

If none of the other health benefits in this article are reason enough to continue (or begin) moderate consumption of beer, how about the possibility that it could forestall your appointment with the Grim Reaper? That’s right, beer may be able to increase your life span. The article The Health Benefits of Beerstates that, “(From the famous U-Shaped Curve) those who drink two pints of craft beer per day have an improved mortality rate of 20-30%”. Isn’t it great to find out that beer is not only a pleasurable, tasty drink but also a good-for-you beverage? Beer offers just as many health benefits as wine, so there’s no reason to feel guilty about moderate consumption.

This article was contributed by Elena Roundtree on behalf of Washington MAST. Elena herself is an beer lover who thinks the drink hasn’t been getting the credit it deserves. For more great beer (and other alcoholic drink) tips and recipes, follow Washington MAST on G+.