3 Things I Learned at the Beer Summit's Winter Jubilee

After spending four hours with some of the most popular beer breweries and tons of beer connoisseurs, you're bound to learn a few cool new things about beer culture and history.

During this weekend's Winter Jubilee hosted by the Beer Summit, I learned a few interesting facts about beers and how they're brewed. 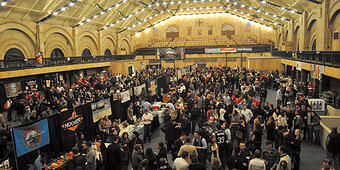 The Purity Order, or Reinheitsgebot in German was a piece of legislation put in place with the intent on keeping beer "pure." The German law put in place said that all beer must be made with only water, barley and hops. This law was created in part to prevent price competition with bakers for rye and wheat.

Interestingly, although this legislation was put in place in 1516 - it is still commonly talked about by beer-lovers from all over the globe. And, the BeerandWhiskeyBros.com claim that understanding how to pronounce it and finding ways to work it into a sentence when meeting other beer lovers may be a sign that you're a beer snob.

2. What "imperial" means when used on a beer label

More and more breweries are popping up with "Imperial" styled beers. If you see a beer with this label, it is an indicator that the beer will have bolder flavors, a higher alcohol percentage, and the hops or malts included in the recipe have been either doubled or tripled.

3. Where the style barley wine got its name.

Although I've only tried two types of barley wine before, I would consider myself a huge fan. During Saturday's session I tried Pretty Things' barley wine "Our Finest Regards" and it was absolutely devine. While tasting, I met someone and who uncovered where the term barley wine originated from. Some beers are barley wines because they can be as strong as a wine, but since they are made from grain, and not fruit, they are still considered a beer.

Beer Advocate claims that barley wines tend to be "Lively and fruity, sometimes sweet, sometimes bittersweet, but always alcoholic" and a "brew of this strength and complexity can be a challenge to the palate." I couldn't agree more - when first trying a barley wine - I had no idea what to expect. It was like expecting a beer but tasting intense but different wine. After a few sips, it tends to grow on you.

Have you attended a beer tasting before? What is something you learned from attending beer festival or tasting?